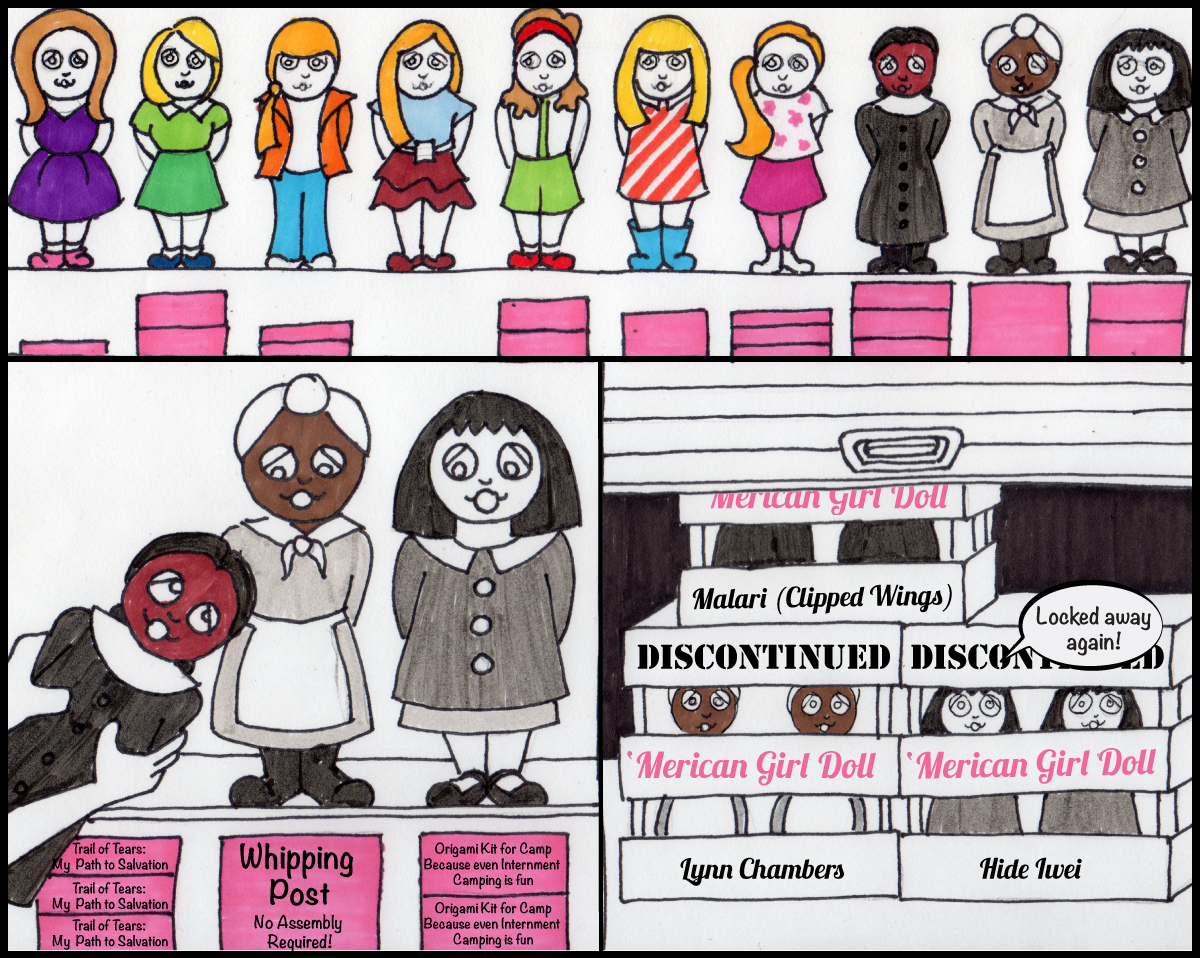 I recently had the (dis)pleasure of accompanying my daughter to a birthday party at the American Girl doll store. While I know this trip was paradise for my daughter, it was like the 9th circle of Dante’s Inferno for me.

Tons of little girls and parents crowded the store. Most of the girls were bringing dolls they already owned, taking them to get their hair done. The American Girl Doll salon charges you an obscene price to do a very limited set of styles on your dolls. Then after roaming the store for about an hour, trying desperately to keep the girls together and getting hustled out of $88 (for two items!) it was finally time for dinner. We were treated to the creepy visage of the American Girl dolls sitting at the table with us, each served in her own coaster and tea cup. Dinner itself was okay, you are obviously not going to give the doll food.

As I walked around the store with my daughter and her friends, it was not hard to see that there is a lack of diversity amongst the dolls. I only have to think back to when I bought one for my daughter and I had to choose between the scant options when creating an African American doll. I could not find a black doll that mimicked my daughters skin and hair, so I ended up getting her one that honestly look nothing like her.

Store Clerk: “Oh Cécile, sorry, we discontinued her. We got rid of all the ethnic best friend dolls and diversity matters very little to us. Have a great sunshiny day!”

OK, so the clerk didn’t really say this, but this it what it felt like she was saying. It is easy to imagine the clerk being bitter after hearing this writer’s story about her job at FAO Schwartz as a toy demonstrator adopting Lee Middleton baby dolls.

And yes, much like the sassy black friend trope, these ethnic dolls were only available when paired with their white best friends.

From ABC News: “Cécile and Marie-Grace, an African-American and a Caucasian, respectively, and described as having formed “an unlikely bond in their hometown of New Orleans” in the 1800s, were presented as a pair. The Asian-American, Ivy, was the sidekick to Julie, a blond-haired doll from the 1970s. The also-retired Ruthie, a dark-haired doll, was the sidekick to the blond Kit Kittredge, both from the Great Depression-era.”

Needless to say I was a bit bummed and so was the gentleman who ended up purchasing Kaya, the Native American Doll. In addition to Cécile there is no longer an Asian doll. There was only one Asian doll on the historical doll roster, even less than the two Black dolls. We weren’t the only ones disappointed about these dolls being wiped from the roster. To read more about the controversy surrounding the discontinuation decision click here: https://gma.yahoo.com/blogs/abc-blogs/american-girl-rebuts-critics-dropping-minority-dolls-160304530–abc-news-topstories.html.

American Girl Dolls reasoned that they got rid of these ethnic best friend dolls to clear the way for a new line this fall. Let’s hope they have better luck with creating a non-offensive Asian doll than the doll makers in this SNL bit: