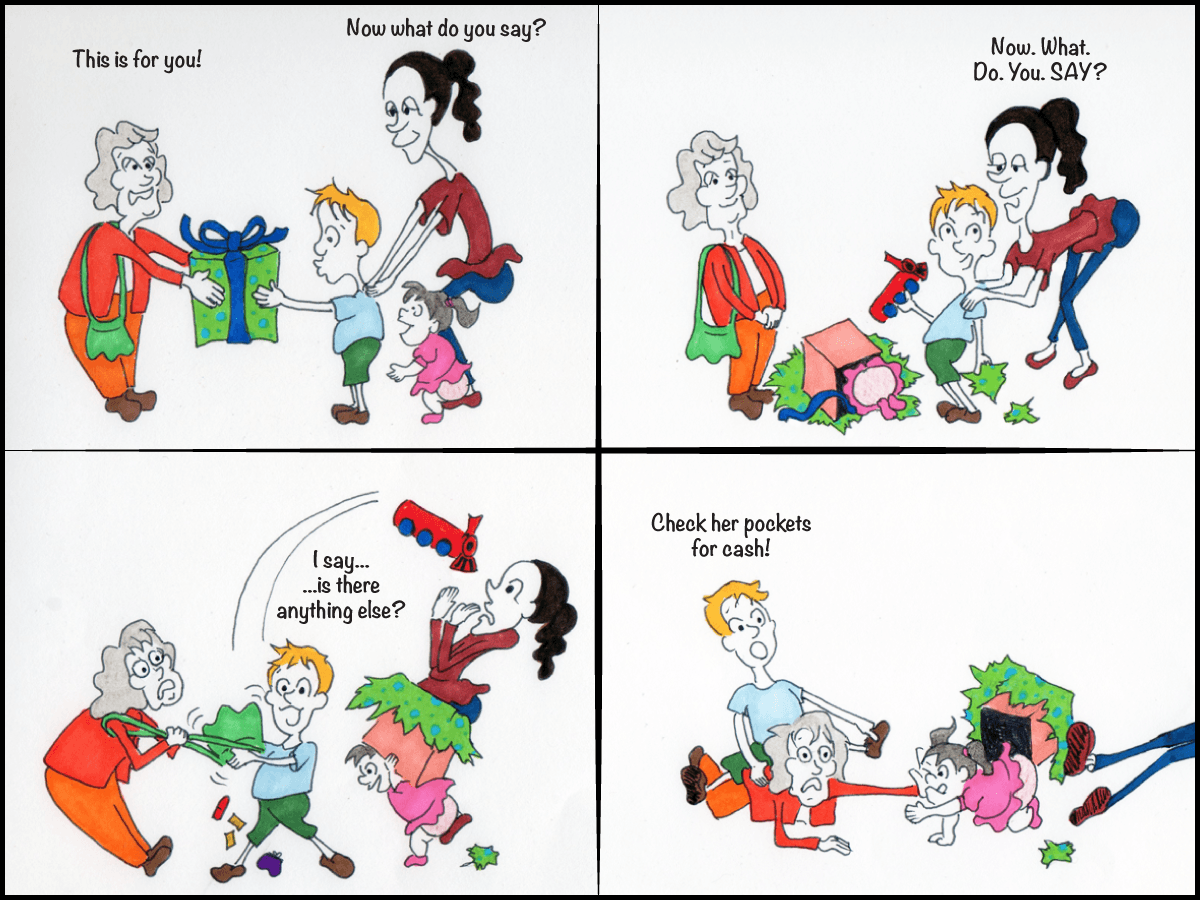 Who do you blame when your kid is a brat?

Who do you blame when your kid is a brat

That’s right after an obscene hiatus, Monette and I are back with a vengeance! I honestly can’t give a good reason for our long break. For me, it was giving into the season’s ability to release sloth-like tendencies. I think we both needed to recharge our batteries a bit and gain some focus. We have had plenty of time to do that so now were back at it. I hope you’ve missed us a little, we’ve missed you.

Sometimes I think that Veruca Salt may just be the patron saint of bratty ass children. I know my point of reference for this comment should be that I have read the Roald Dahl classic Charlie and the Chocolate Factory, but it isn’t. Like many of my seemingly illiterate American brethren I have only watched the films. [Monette: WHAT?! Roald Dahl was my favorite! And despite recently learning that he was an anti-semite, I think you should read them right now, Asha!] The 1971 classic starring Gene Wilder and the 2005 abomination with Johnny Depp. The 1971 film is the one that I remember watching as a child and so it is imprinted in my brain as the best one and references made hereafter will be referring to Willy Wonka and the Chocolate factory as the only source.

“When I make my first entrance,” he explained, “I’d like to come out of the door carrying a cane and then walk toward the crowd with a limp. After the crowd sees Willy Wonka is a cripple, they all whisper to themselves and then become deathly quiet. As I walk toward them, my cane sinks into one of the cobblestones I’m walking on and stands straight up, by itself; but I keep on walking, until I realize that I no longer have my cane. I start to fall forward, and just before I hit the ground, I do a beautiful forward somersault and bounce back up, to great applause.” Asked why, Wilder said, “Because from that time on, no one will know if I’m lying or telling the truth.”

OK, that was really not related to our comic or to bratty kids, but we just had to put in a link to this letter from Gene Wilder about his portrayal of Willy Wonka because we thought it was cool.

I Want It Now!

In the film, the children were bad little monsters (with the exception of the almost saintly Charlie). In my opinion, I always thought that Veruca was the most spoiled apple of the bunch. She is clearly a child of privilege coming from an affluent family and has never been told “no” in her life. In the film, her father caves and bends to her every whim. That’s why it is so satisfying when she finally gets hers.

Here’s hoping the furnace was lit that day …

In the film, the Oompa-loompas ponder the question of how to handle a bratty child. According to them, the only source to blame for kids’ brattiness is their parents. As a parent I know that kids can all have moments where they orbit the brat universe. A little bit of brattiness from a child is probably to be expected, but what happens if your child not only orbits Planet Brat but also happens to live there almost full time? This article can give you some advice on handling and counter acting bratty behavior

Okay I will readily admit that I have a minor obsession with the 90’s, so it really warmed my heart when I heard about Veruca Salt reuniting and touring last year. I was surprised to hear that they had reunited and really want a group tour with Elastica, L7 and Hole.

For those who don’t know Veruca Salt, the band had a kick-ass breakthrough hit with their song “Seether” – of which Veruca, the character, would have approved. It was about a girl that oozed dissatisfaction so much that she would start foaming at the mouth.