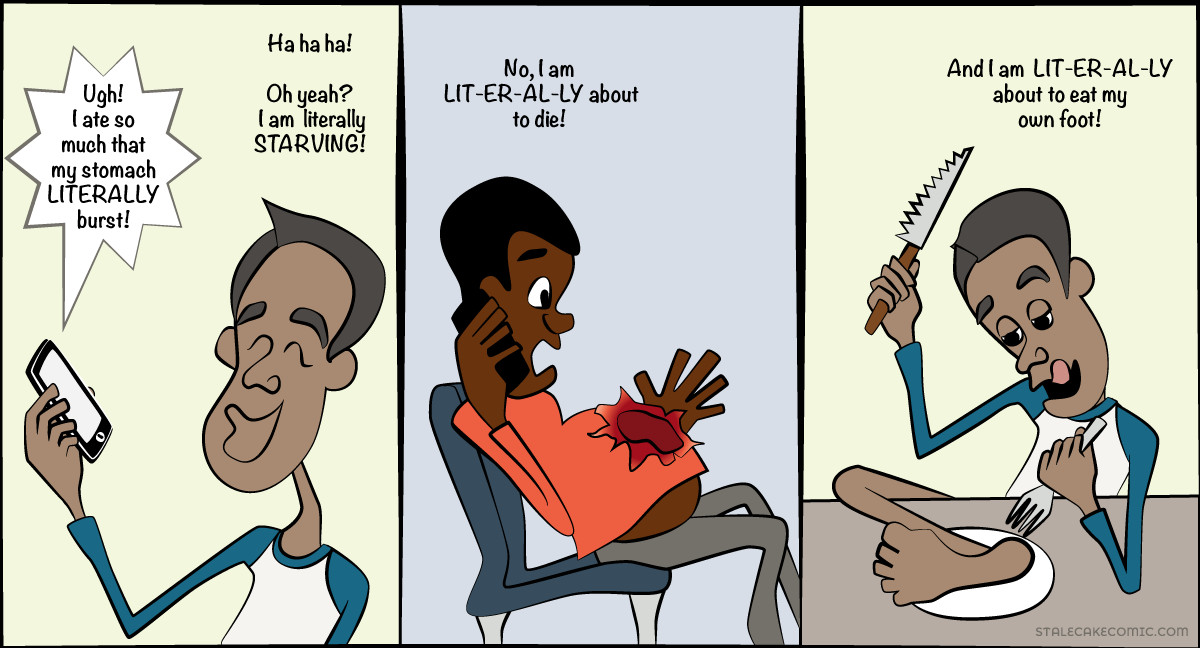 You are literally reading this right now

You are literally reading this right now

It is pretty well known that the English language is hard to learn. Have you heard some of our native speakers butcher the language? The rules of the language are not consistent and it is not always easily understood why or when those rules are violated. It also doesn’t help when words change in meaning.

In 2013, the official meaning of “literally”, a word that many have been misusing, became good friends with its adversary, “figuratively” and then single-white-femaled it. When we Stalecake-ians first heard the news we went Amy Winehouse and declared “what kind of fuckery is this?”

In order to break down why this is so freaking crazy we must first start at the very beginning. Since many didn’t know what literally originally meant, we would like to jog your memory:

Definition of LITERALLY from a 1940’s dictionary:
1. According to the primary and natural import of the words; not figuratively; < a man and his wife cannot be literally one flesh >
2. With close adherence to words; word by word; < to quote a writer literally >

This seems like a simple easy definition to grasp, but people couldn’t leave it alone. It seems this definition change was a long time in the making. Misuse of the word “literally” can be traced back to the 1820’s. The article notes that in 1894 Sir Arthur Conan Doyle wrote that Sherlock’s room “was literally ankle-deep with congratulatory telegrams.” While we could believe Benedict Cumberbatch would have this problem, we’re not sure Doyle meant it in the traditional sense.

People tend to talk in extremes, so we have begrudgingly accepted this new-and-not-so-improved version of “literally”. After all, when people tell us they are “starving” as we wait in line for pie, we don’t even blink. But if your eye twitches every time you hear or see “literally”, Google Chrome has an extension for you that replaces every instance of “literal” with “figurative”.

“Literally” is not the only word that is commonly butchered. Here are others: http://www.copyblogger.com/commonly-misused-words/. Monette admits that she probably misuses many words on this list. Asha’s favorite misused word is “irregardless”- it’s worse because it is not even a real word. If you use this word, she will think you’re an imbecile REGARDLESS of how many degrees you have.